The Moreland Church of God
​ 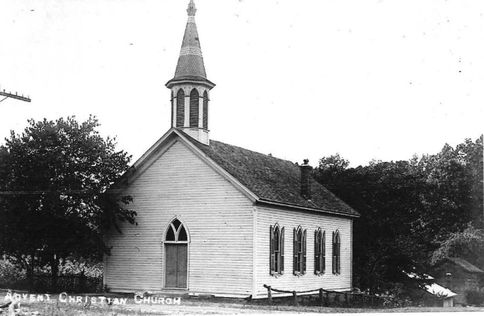 If you would like to help the Moreland Community Historical Society in their quest to restore this nearly 137 year old building, please visit our GoFundMe account:

​In 2016, the Moreland Community Historical Society purchased the old church building located in the heart of Moreland in hopes of restoring it. Shortly after acquiring the property, the Historical Society tore down the decrepit block building located beside the church and began making restoration plans for the original 1882 Church of God building. Plans changed that summer when the south side of the building’s foundation crumbled, leaving the church in dire condition. Immediately, The Historical Society, along with many local residents, set out to save the local historic landmark. The church wall was saved before a crew came in to raise the building and move it to the back of the property. On August 10, 2016, a "church raising" was held as many local residents and businesses helped build a new block foundation for the building.

On Thursday, April 26, 2018, with much anticipation, many throughout the community came out to witness the twenty eight foot tall steeple being lifted in the air by crane and placed on the church. The new steeple finished the appearance of the Church’s roof, which was covered with new plastic shingles made to look like the original cedar shakes.

Now that the exterior of the church is near completion, the Historical Society has turned its focus to the interior. A local artist, Rusty Baker, came in this fall to replicate the ornate Fresco paintings that once covered the walls of the church. In 2019, the Historical Society would like to see the basement complete in order to provide a functional, yet beautiful, historic building available to the community to rent for family gatherings, weddings or special occasions.

The Historical Society’s decision to take on the huge task of restoring the Church of God has been very humbling. Many from the local community have donated money, in-kind services, skills, and their time to help bring this dream to a reality. The local Amish community has donated many afternoons repairing the collapsed foundation and pouring new concrete. Much of the accomplishment of this reconstruction is a direct result of the exceptional community in which we live. The Historical Society is very grateful for all those who have donated or helped in some capacity.
On April 26, 2018, many from the local community came out to witness a crane lift the new twenty-eight foot steeple and place it on the roof of the Church of God. 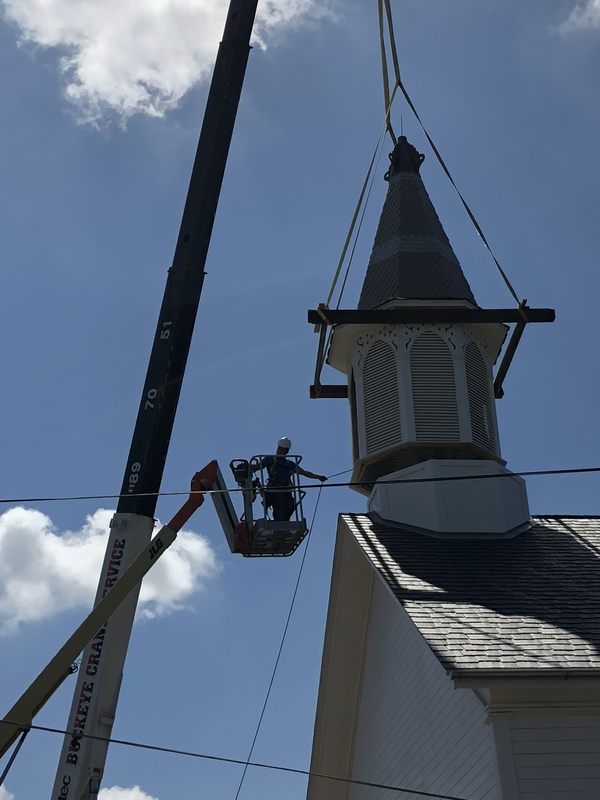 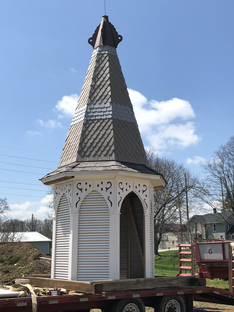 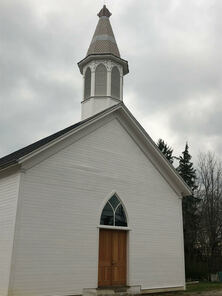 The Reconstruction of the Hughes – Gilmor Log Cabin
by Matt Gress 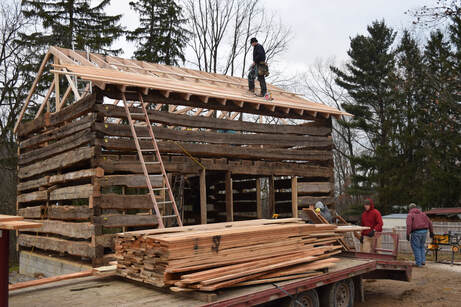 ​Moreland Community Historical Society (MCHS) current board member Matt Gress has been the primary organizer of the reconstruction project of the old log cabin that sits just north of the Historic Church of God on St. Rt. 83 in Moreland.  Matt has recounted this effort, still in progress, and the many individuals who have volunteered and provided their muscle, talent, & time.

On a perfect mid-October morning in 2020, Earl Christman, longtime Moreland excavator, arrived at the site with his equipment.  After several months of working with architect Jeremy Frye and the Wayne County Building Department, it was time to break ground and dig a basement.  Earl made short work of the hole, and prep began for pouring footers.

Head contractor for the project, Levi Hostetler then took over and had the footers poured and the first inspection passed within a week.  Now came the time for laying up the block.

An old-fashioned frolic was organized through the Moreland community.  Dan Hershberger and his crew, along with Elrose Hochstedler and his boys, Larry Miller’s boys and several other block layers converged on the site before sunup. Soon the mixers were mixing, the tenders were tending, and the basement walls began to take shape. First coffee break came around 10 am when Emmanuel Miller of Moreland Fruit Farm provided still warm (and weighing about a half pound) glazed doughnuts for everyone.  By the end of the day, and with a cookout lunch provided by MCHS, the basement foundation was completed.

After installation of a floor came the time everyone was looking forward to – stacking the logs.  After the original cabin was dismantled, the logs were individually labeled and put in storage by David Bricker. Now was time to dig them all out and identify each log and lay them out in such a way that they could be brought to the jobsite in the order in which they were needed.  No small task!

With December frost on the ground, the logs began moving to the site of the cabin.  In normal construction, a building is built to fit the foundation.  In the case of the cabin, the foundation had to be built to fit the building!  Trying to determine what size the basement should be, based on measuring a bunch of logs in a pile, no one was completely confident how it was going to turn out.  But, our anxieties were alleviated when the first logs were set on the basement and we saw that Levi’s calculations were spot on!

Alternating one side, then the other, logs began to go up in the air.  A few of the logs from the original cabin proved to be too badly deteriorated for re-use, but luckily, we had some logs from another Franklin Twp. cabin from the old Frank’s farm on Moreland Road.  The only problem was they needed to be cut to length with a dovetail joint at the ends.  Workers on the job soon learned that with all our modern tools and chainsaws, they could not cut as nice a joint as the pioneers did with a hand ax!  It was a humbling experience.

For about the next 2 weeks, logs continued going up and rafters were installed on the top row of logs.  Rough cut lumber was brought in for the gables and the roof sheeting.  Levi recruited his son, Marvin as roofer.  This was ideal because Marvin could fasten down lumber as fast as we could hand it to him.  After being blessed with unseasonably nice weather, the last day on the job brought snow.  It was time to halt work on the cabin for 2020.
Now that Spring has arrived, it is time to get back to work.  Lumber is on order for the porch, window and door frames will be installed, and the last remaining short logs can be placed.  The south side of the cabin will be where the stone fireplace and chimney will set.  Dave Mann spent many hours walking the Savage Run Creek on his farm to find just the right size stones with a variety of colors that should give the fireplace the perfect look.
Once all this work is done, it will be time for cleaning, staining and chinking the logs.  Chinking is a process where insulation is put in between the logs and a putty like material is spread to seal the cabin from the weather.  A local contractor, Nathan Weaver from Frontier Finishing will be hired to do the staining and chinking. Plans are to have the cabin finished by Fall 2021.
​
The reason for restoring the cabin is that we know it was one of the first structures in Wayne County outside of the city of Wooster.  John Hughes erected the cabin in 1816 after moving here from Pennsylvania.  Terry and Laura Gilmor donated the cabin to the MCHS and our goal is reconstruct it in as authentic a manner as possible.  No electricity, no plumbing.  We would like to furnish the cabin with only the primitive items that the settlers may have had during that time.  The desire of MCHS is for the cabin to be preserved and have a place of prominence and to be used and appreciated by school children and adults to learn about what life may have been like 200 years ago.